Belfast Region City Deal partners are poised and ready to deliver on the Minister for the Economy Diane Dodd’s ambitious new economic vision ‘10X’, which will lead to better jobs with better wages and an improvement in people’s quality of life. 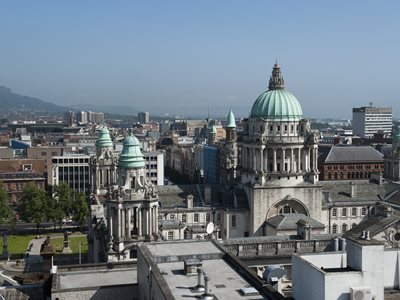 The 10X vision recognises that the City and Growth Deals programme is “game-changing” for Northern Ireland – and that the injection of £1 billion investment in bespoke packages to build innovative capacity and capability throughout Northern Ireland will make a major contribution to driving inclusive economic growth in the regions.

We very much welcome the Department for the Economy’s '10X Economy: An Economic Vision for a decade of innovation' and its recognition of the significant momentum that we’re helping to create. It’s really heartening to see that, as with the Belfast Region City Deal partners, the Department is taking a bold, ambitious and inclusive approach, focusing on the parts of our economy where we already are, or can be global leaders.

“10X also emphasises the need for collaboration – and the Belfast Region City Deal partners have already proved that we can achieve so much more together, when we pool resources, expertise and influence. And with the recently launched Innovation City Belfast partnership which brings together Belfast City Council, Belfast Harbour, Catalyst, Queen’s University and Ulster University, with Invest Northern Ireland as an advisory partner - to establish Belfast as a globally significant destination for innovation, we’ll really start to see progress in this arena.

There’s a clear window of opportunity for the Belfast region right now.  We have ambitious, robust plans in place - capable of transforming our economy and creating new and better jobs post-COVID. And we’re all pulling in the same direction, with the same degree of commitment and energy.

“We’re really keen to get the Belfast Region City Deal signed by the NI Executive and UK government so that we can start to deliver our plans – and people can start to benefit from the opportunities this ambitious programme of investment will create.

The NI Executive has committed £350m to match fund £350m from the UK Government for the Belfast Region City Deal. Combined with a £150m commitment from the BRCD partners, the overall investment package currently stands at £850m for the 15-year programme.

Government and partner investment will also leverage critical private sector investment that will ensure delivery of a deal with a value well in excess of £1billion.

Get more information on the Belfast Region City Deal

Updates are posted at #BRCityDeal.