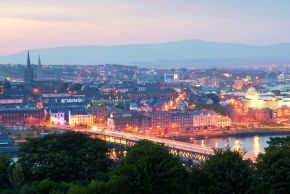 In addition to £210m funding being provided equally by the Executive and the Westminster Government, a further £40m investment from Derry City and Strabane District Council and its delivery partners means the region is set to benefit from a £250m economic package.

“This is excellent news for our colleagues in the Derry~Londonderry and Strabane Region– and shows the Government’s commitment to investing in innovation and inclusive economic growth.

“Both the Belfast Region and the Derry~Londonderry and Strabane Region City Deals have real vision and ambition – and they’re based on the same values of collaboration, partnership and driving sustained, long term inclusive growth. These investments will significantly boost quality of life and the economy not only in our regions, but across the whole of Northern Ireland.

“This announcement is a boost for us all as we work to recover from the shocks of the COVID-19 pandemic. These City Deal investments will be vital in helping to rebuild our economy following the COVID crisis and will contribute to our long-term resilience. We’re going to see significant regeneration, increased productivity, and new and much needed jobs created here. We look forward to working with our colleagues in the Derry and Strabane Region to ensure that we maximise the benefits of these investments for all of us.”

The BRCD partners are working with the NI and UK Governments to seek to deliver the next critical stage of the deal, the signing of the final deal document, which will allow government and partner investment to start to flow into the city deal investments early in the next financial year.